After the short flight from Sandakan back to Kota Kinabalu, I was met by a representative of the Gaya Island Resort, and transferred to a hotel with its own marina and ushered into a lounge where I checked in to the resort and was given a refreshing sorbet to eat. Also waiting in the lounge was one of the families I had met at the Kalibatangan River Lodge. After half an hour, we were taken to the dock and boarded a small boat to Punau Gaya. We arrived at the dock, the waters around which were teeming with fish. We were all given a welcome drink and handed a list of activities. I was shown to my room, which was a ten minute walk up the hill along a boardwalk.

I did not mind the long walk to the room, but the resort would not be suitable for anyone with any mobility difficulties. I settled in, and arranged to do some laundry. To my dismay, they ship this to the mainland, so it takes some time, as I was completely out of clean shorts at this point. Not having clean shorts would restrict the activities I could do, as a hike would not be best in a dress and it was much too hot for jeans, and these were my only clean clothes. It turned out to be tricky to book any activities as the phone in my room did not work. This made booking activities, dinner and spa treatments a bit of a challenge.

After settling in and having a bit of a look at the resort, I decided against having dinner and just went to bed. I woke bright and early the next day, and had breakfast, before realising that I would then have to wait before I could take a boat to the private beach. I decided to try to sign up to some activities the following day while I waited, only to discover that things like snorkelling and kayaking were fully booked. I signed up for the nature walk in the morning.

View from my sun lounger

A short hop on a speedboat got us to the private beach. It has a restaurant with a fixed menu for two, so not suitable for a lone vegetarian. There are some sun loungers, a couple of hammocks, and several staff members to hand you a towel and a bottle of water in an ice bucket. Along with the other six guests, I grabbed a lounger in the shade and read for a bit before having a swim. The water is really warm and clear, but there is a lot of litter in the water, especially plastic bottles, which is rather unfortunate. There were lots of well camouflaged cream fish with brown stripes and invisible jellyfish which periodically inflicted a short sharp pain like a small electric shock. I thought I was imagining it until two Swedish girls started squealing about it happening to them too.

Back at my sun lounger, I heard a rustling a turned to discover a bearded pig in the bushes behind me. One of the staff members told us that she was the last of a litter of four that had been born behind the restaurant, and she was reluctant to leave her mother and favourite spot to snooze under a tree right behind the restaurant. They have another common visitor, which we also saw, in the form of a metre long monitor lizard.

When I was having another swim, I got back to discover that my towels had been changed and my sun lounger had been swept free of sand. Very posh. They talked me into having a cold coconut to drink, which was very refreshing. By this time the sun had moved and my shady lounger was in the sun, so I got the boat back to the resort. Once back, there was little to do but sit in my room and sort through photos and update my blog, as I had had enough sun. There is wifi, for an extortionate 50 ringgits a day, but I bit the bullet and paid it as I had not had much access to wifi in Sabah. In the evening I had an indifferent pizza in the bar, which was the only vegetarian food on offer, so washed it down with a large glass of wine.

The following morning I nearly missed breakfast before my nature walk as I was busy playing with my photos, so I just had some fruit before meeting Iffah, the guide, and heading off on the boardwalk around the resort. On the way down to reception to join the group I passed a beautiful green lizard which was terrifying a Chinese tourist. I am glad I paused to snap a quick picture of it as it was gone when we came back that way about fifteen minutes later. I only had time for one shot, so I am glad it came out really well – it is the picture at the top. 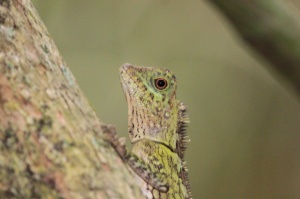 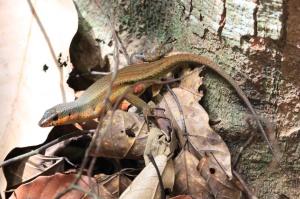 As we headed up into the jungle on the hill behind the resort, it soon became clear that this walk was going to be all about lizards. We saw lots of angle-headed lizards, another of the little green-crested lizards I had seen down on the boardwalk and a skink, as well as tiny flying lizards we saw skimming between trees.

Iffah also pointed out big mud balls sitting about a metre above ground level. Theses operate as air conditioning for underground termite nests, and one can see the little mud tunnels heading along branches and underground taking the fresh air to the colony beneath. We could hear monkeys occasionally, it did not see any. It was a nice group, and a pleasant walk, although hot and sweaty as is the custom in Borneo.

Back at the hotel, I went for a swim in the pool and then the day stretched somewhat ahead of me. I was not in the mood for more sun, and all the activities which were interesting were fully booked. I decided to have lunch in the restaurant to relieve the boredom, only to discover that the only veggie option was the same indifferent margarita pizza on offer the night before. Once again I decided not to bother, and passing through reception, had a bit of a whinge about the lack of activities. This turned out to be a good thing, as they signed me up for a mangrove kayak that afternoon and snorkelling the following day, both if which had been full when I enquired earlier. Sometimes it is good to complain!

It turned out that some of the people on the kayaking trip had been on the nature hike that morning. Even though the trip itself was not wildly exciting, I did quite enjoy it. Once again our guide was Iffah, and we set off from the beach to the mangroves. A very nice London couple I had met that morning, Andy and Diana, were in the group. Hilariously, Andy was amazingly incompetent at kayaking, and kept lying down in the boat, and was rather carried by his tiny wife who was much more adept at paddling. We paddled up a rather smelly inlet in the mangroves, where we saw a few small back crabs and some tiny mudskippers. We heard lots of cackling pied hornbills but did not see any. We had not gone very far before we had to turn around, as the tide was low and it was very shallow.

After the trip, Iffah told Andy and I to meet Justin, her boss, at the pool, and to bring my camera. As I headed back up to my room to get my camera, I could hear the distinctive sound of pied hornbills, and I saw a pair sitting in the tree just outside my room from the boardwalk below. I rushed up the hill to my room and quickly grabbed my camera, but I could tell from the silence as I emerged that the birds were gone, and sadly they did not return. 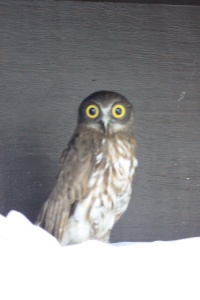 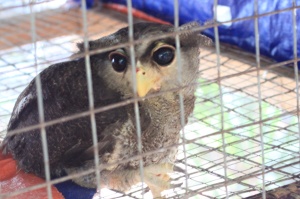 Justin had a surprise to show us. When he appeared, it turned out that the surprise was two owls he was nursing back to health. He kept one in a shed and one in the office, and they were both lovely birds. Eventually he hopes to release them into the wild. The hawk owl was already allowed to fly around but has become attached to his spot in the office. I took some fuzzy photos of them, as it was too dark to shoot properly without a flash. We had a chat about a child that had become infamous at the resort. An English boy of about ten, he kept grabbing at the wildlife. Even being bitten by a lizard had not dampened his enthusiasm, and I met him on the boardwalk when he tried to catch a little snake that had to take a flying leap of the boardwalk to avoid him. Justin mentioned he had tried to educate he child to appreciate the wildlife in a more hands-off fashion, but with little success. The yellow grasshopper was one of the child’s captives which he brought to show Andy and me on our way back for looking at the owls. As a result, I kept my discovery of a giant lyssa zampa moth, about the size of the palm of my hand, to myself. I do wonder if that boy will one day be bothering wildlife on TV, in the style of Steve Irwin. He certainly had the zeal! 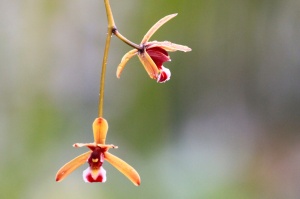 Andy and Diana invited me to join them for dinner. I am so glad they did, because not only were they delightful company, but they seemed to have become particular favourites of the chef. As a result, I just told him to please make me some vegetarian food, and with no further instructions required, a very nice meal appeared. The chef came to check on us, so we made valiant attempts to eat it all, washed down with some rather nice wine. A bearded pig appeared on the beach below as we ate, but vanished as soon as it realised we had seen it. He must have been afraid he would end up on the menu! 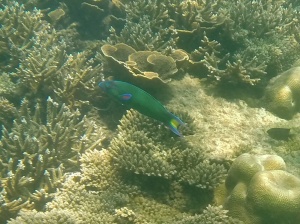 The following morning I went snorkelling off one of the small uninhabited islands nearby. It was pleasant enough and I saw quite a few fish, especially parrot fish, but I had been rather spoilt by the Great Barrier Reef. Although the water is clear, there is quite a lot of litter floating past, which is a real shame. After that, I had to head back and shower and pack for the long trip back to London. All too soon, three months of travel had come to an end, and it was time to grab my trusty (and by now badly battered) little case for the last time and head home. Perhaps appropriately, it poured with rain as I departed.