I nearly left the airport in Lihue, Kauai with a Jeep, but learning from my experience in Maui, I stuck to my guns and insisted on a compact car, and was delighted to leave in a Ford Focus. Having driven one before, I would not struggle to find the lights or the windscreen wipers. And I would be able to park it! As I head to claim my little car, I am greeted by a rooster. The chicken appears to be the bird of Kauai. They are, I am to discover, everywhere. In the car hire parking lot, in the hotel grounds, at trail heads and waterfalls. Apparently their prevalence is due to the lack of mongoose on Kauai. This predator was introduced to the other Hawaiian Islands to control the rat population. The mongoose made no impact on the rats, being happily tucked up in bed while the nocturnal rats are out and about, but devastated the bird population during the day as they do love eggs for breakfast. So while I saw the odd chicken in Maui, they are not as ubiquitous as on Kauai. The road to hell is truly paved with good intentions. For whilst some might say the jungle fowl are a nuisance, the mongoose happily snacks on the eggs of many, often critically endangered, Hawaiian birds. 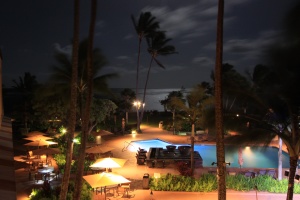 Pool of the Courtyard Kauai in the full moon

My hotel was just a 20 minute drive from the airport in the town of Wailua. To my surprise it was full of US service personnel, there to provide a clinic to locals who needed medical attention. Whilst I applaud the charitable spirit of these serving doctors, nurses and dentists, it was odd seeing half an army every time I walked through the lobby. I had to resist the urge to salute.  They must have been hot in their combats, but in suppose there are far worse hot places they could have been. 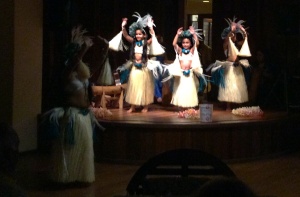 The hotel put on nightly entertainment, including singers, but my favourite was a group of tiny girls quite literally shaking their tail feathers with a hula display.

On my first full day I set off later than intended for a hike. Having struggled to find the trailhead, by the time I set off it was very hot and humid. Initially I continued to climb, thinking it would get cooler as I went higher up the hill known as the Sleeping Giant, but I had underestimated the amount of water I would need in the humidity so I turned back before going very far when I ran out. I took a short drive to check out Opaeka’a Falls and a view of the Wailua River. I try to capture a red headed Brazilian cardinal on camera in the parking lot, but after snapping two shots of its back a car pulled in, frightening him away. Hot and thirsty, I retreated to the hotel and settled for a walk on the beach instead.

Na Pali Coast from the air

Kauai’s kings were buried in this valley 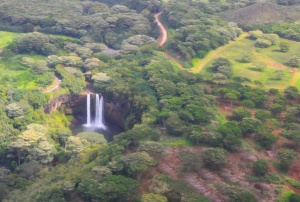 Wailua Falls from the air

On my second day in Kauai, I went on a helicopter tour of the island. This is a great way to see the whole island, but I had an old address for the operator and turned up in the wrong place. Although I eventually found it by following the helicopters back to the helipad, I forgot to take travel sickness tablets before the flight in all the stress of trying to get there on time. This was a huge mistake. Unfortunately the 30 minute trip was very bumpy and, beautiful though it was, I spent much of the flight focused on not redecorating the cabin. We started by flying over the falls which feature in Jurassic Park, which (as I was informed at every turn) was filmed on Kauai. A look at Mount Wai’ale’ale, which is the rainiest place on Earth, or one of the rainiest places, depending on who is telling you this, and we flew over the beautiful Na Pali Coast, accessible only by sea or after a very long hike. Finally we flew over the Waimea Canyon, known as the Grand Canyon of the Pacific. Despite the breathtaking views, I was glad to be back on terra firma and headed back to the hotel to recover. I realised I would need a trip to a camera shop before continuing my travels as my SD card would not format, but once I was sure that my breakfast would be staying with me, I found a place to buy a new SD card and then set off to find the Wailua Falls, which I had seen from the air earlier. These pretty falls sit on a beautiful pool, but when accessed by road can only be seen from the side, which does not really show them to their best advantage.

Wailua Falls from the ground

Heading up the Wailua River

I drove round the island to the town of Poipu the following day for a kayak and hiking excursion. It was a 30 minute drive, whereupon we loaded into a van and drove to within a mile of my hotel to start the excursion. We had some drama on the way when the presence of a tiny gecko caused hysteria from a German honeymooner. I scooped him up to rescue him from her shrieking, but he soon jumped off my arm and set out to explore the van. I hope he survived. We were a small group made up of the German honeymooners, an American and his German girlfriend, two girls from San Francisco and a mother and teenage daughter from Illinois. As this was not an excursion for a DSLR, I just brought my phone to record the excitement, hence the grainy pictures. 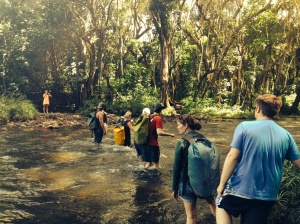 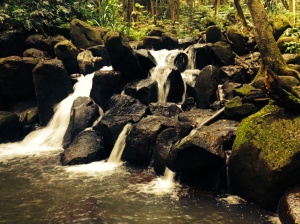 These falls were used as a spa by Kauai’s royalty

We set off in two person kayaks. As the only solo traveller, I shared with Nick, our guide, which meant that paddling was optional for me! After a gentle paddle a couple of miles up the river, we stopped, tied up the kayaks and, leaving a chicken standing guard, we set off into the forest. At first it was a very pleasant hike along the river but we were soon to see the effects of Mount Wai’ale’ale, the (nearly) rainiest place on Earth. After crossing the river, it started to get a bit muddy. And then it got muddier still, until we were wading calf deep in liquid mud. If you are wondering why there is no photographic evidence of this, I tucked my phone away at the river crossing and was too muddy to retrieve it after I slipped and fell onto my well cushioned rear. Not in the deep mud, fortunately. We eventually came to the waterfall, where I swam in my shorts and shoes to rinse off the mud. After a swim, some photos and a spot of lunch, closely watched for crumbs by some chickens which are naturally at the hidden falls, we headed back towards the kayaks. After some excitement involving a teenage boy who had wandered up the slope from the river and got stuck on the steep and rocky slope from where he needed to be rescued by a guide and another rather hard fall in the mud from me, we made it back to the kayaks. Although downstream on the way back, a headwind made it harder than paddling upstream but fortunately I had the relentlessly cheerful Nick to do the hard work! Once back in the van, he admitted he was pleased we were all in one piece, as sprained ankles and broken wrists are a common occurrence on the trail. Exhausted (falling over is hard work), I returned to the hotel for a much needed shower and to try to rescue my muddy clothes. A tip to anyone planning that trip – consider doing it barefoot with some waterproof shoes for the falls, as the pool at the base is rocky. 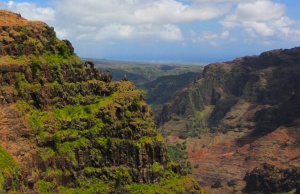 The canyon from my hike

Flowers by the path

The following day I drove to the Waimea Canyon to explore it more closely. Stopping at various lookouts, I saw spectacular views of the canyon, watching birds flying hundreds of feet beneath us. I bought some water and set off down a hiking trail lugging my camera gear with the intention of heading just a few hundred metres along the shaded path through the trees, looking for the birds I could hear. Despite hearing a lot of birdsong, I could not see any birds. Once I started to head downhill, I kept a close eye on the time, telling myself I would turn around after half an hour at the most as I had no food with me and just a small bottle of water. Just as I was about to turn around, I was joined by a delightful family from California, who gave me another bottle of water and egged me on. We made it all the way to a small waterfall before starting back up. It was not too hot on the way down as the path is mostly shaded, but the climb back up was steep and arduous, and they soon left me behind. I like to think I was slowed down by the three kilos of camera gear I was lugging. I was caught by another woman who persuaded me to take a short cut with her back to the car, on the advice of another hiker. We eventually made it back to the road after I had been hiking for more than three hours only to discover we were in the wrong car park! I was worried, as I was now very hot, out of water and starting to feel sick, but fortunately the nice family were waiting for me, and drove us both back to our cars. Thank goodness for the kindness of strangers. 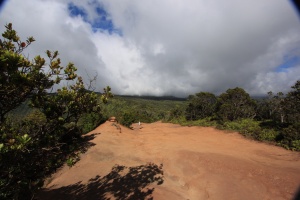 Mount Wai’ale’ale with its permanent cap of clouds

The coast at the top of the Waimea Canyon

Finally back at my car, I decided to see the end of the road despite feeling unwell. I set off slowly at stopped at a restaurant nearby to get some more water, but they were closed. However, I finally got my picture of the beautiful Brazilian cardinal amongst the chickens in the car park! I am glad I saw the coastal view at the end of the drive, which was simply stunning. I did have to stop at almost every opportunity on the drive back down as I think I was affected by the altitude and was really not feeling great. Despite this, it was beautiful, and I really enjoyed the day. A rainbow appeared towards the bottom of the drive back down to the coast just to cap it off. The drive down is great because you can see the view without risking your life by not looking where you are going! 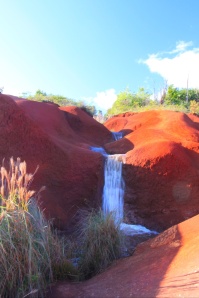 Somewhere over the rainbow

I was sad to leave Kauai the following day, but l was looking forward to the Big Island, with its active volcanos and endemic wildlife.