I flew to Adelaide from Sydney. The time difference is a bizarre half an hour behind Sydney, although I am sure that some wags might say the time difference is more like a few years! They do like to point out to Sydney residents that the original residents were settlers, not convicts, round here. When I arrived it was raining heavily on and off, and although Adelaide looks like a charming city, I decided to sit out the rain in my rather nice hotel room, writing the Sydney blog and doing boring but essential laundry, emerging only briefly to stock up on essentials. Early on Tuesday morning I flew to Kangaroo Island, just south of Adelaide. It was a 20 minute hop on a 30-seater twin prop plane. I was met by Tim, a local beekeeper and part-time tour guide who was to drive me and a couple from Sydney around the island for the next couple of days. Ron and Vivian have been married for more than 60 years, have lived all over the world and were really great company. 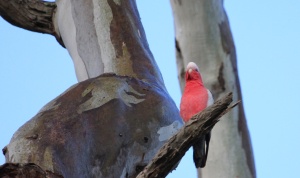 Tim immediately found us a koala, clinging to a tree and looking rather cold. It was high in the tree, so Tim promised to find one lower down later.  As well as the koala, I was delighted to see a galah and some crimson rosellas. These beautiful brightly coloured birds are common in Australia, so I think the Australians were somewhat bemused by my delight. We then stopped for a cup of tea at a billabong. Some black swans drifted past and disappeared rather quickly, but despite the lack of birdlife, it was a beautiful spot.

As promised, Tim then found another koala in a smaller tree. He gazed down at us while I took his picture.  They are not the most intelligent looking animals, but they certainly are sweet.

We then set off looking for wallabies warming themselves in the sun at the edge of the bush.  They cannot wander into the open as wedge tailed eagles patrol the skies looking for them, but can be seen at the edge of the road enjoying the winter sunshine. The first one we saw bounced off, but suddenly there were loads of these small creatures, gazing at us with big eyes.  I will find it hard to be intimidated by the Australian rugby team having seen the creature for which they are named, which could not be cuter.

We then visited an area of protected endemic plant life where the endangered glossy black cockatoo can often be found. Although we saw none of those, we saw lots of other birds, including another crimson rosella, and wallabies and kangaroos which were remarkably relaxed about our presence as we went for a short hike. Occasionally one would decide he did not like the look of us and bound away, but for the most part they continued dozing or grazing. 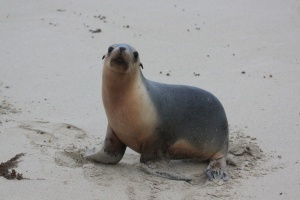 I guess I’ll just amuse myself then

After a delicious picnic lunch in the bush featuring local produce and affording the opportunity to snap a tiny scarlet robin perched on a fence, we went to see the Australian sea lion colony at Seal Bay. Most of the sea lions lie snoozing in sheltered spots in the sun, but one young pup was playing in the waves at the beach, and came racing over when he saw us, eager to show off. It was hard not to react to his antics, but since he will grow to 350 kilos it is important he does not grow up to think of people as playmates. He raced up and down the beach, coming to within a few feet of us, rolled over and threw a piece of seaweed around.  He was obviously looking for someone to play with whilst the rest of his kind dozed. As we left, we saw one small pup suckling from his mother right next to the boardwalk.

I stayed at a B&B on the island called Molly’s Run where I was the only guest.  It is a lovely Tuscan style villa with coastal views which has been beautifully decorated.  The owner Paul made enough food for about twelve, so I had to sit and eat as much as I could so as not to hurt his feelings. He was feeling a bit low as the eponymous Molly, a boxer dog, had very recently died. Eventually I retired to my room to collapse into a food induced coma for the night. 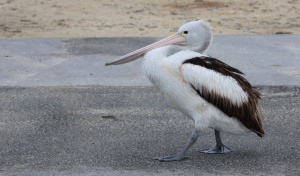 The following day we headed up to Flinders Chase National Park after looking at the Australasian pelicans near Kingscote. As well as many of these large pelicans, there was a host of cormorants warming themselves in the morning sun. 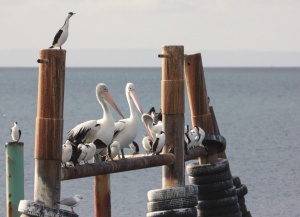 Pelicans and cormorants sitting on the dock of the bay 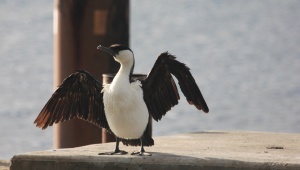 Cape Barren goose on the nest

After a beautiful coastal drive, punctuated by frequent showers, we arrived at the park. Cape Barren geese, with their high visibility beaks, nest by the roadside at the entrance. We went to look at the colony of New Zealand fur seals that haul out of the Southern Ocean here where an arch has been carved from the cliffs by the sea. It was very windy and blustery, but the section where the seals lie is sheltered and once again we could see many seals snoozing contentedly in the sun, including lots of tiny pups waiting for their mothers to return. Other more energetic seals played in the strong surf nearby. 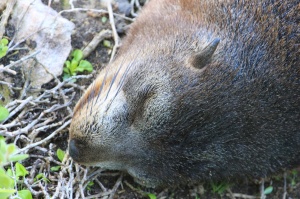 Nothing feels better than a snooze in the sun 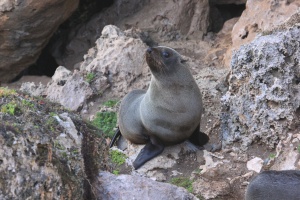 The only one awake 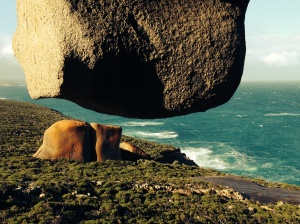 We beat a rain shower back to the car and continued to the rock formation known as the Remarkable Rocks, which are granite boulders left behind as the cliff erodes around them.  As it was raining when we left the car, I left my camera behind and decided to use my phone. It is a bit of a shame as the shower passed and it was wonderfully sunny, and they are really quite remarkable close up, and my phone snaps do not do them justice.

As the winds were so strong, we headed back to the visitor’s centre for our picnic lunch, closely watched by some magpies. In the bushes nearby, some tiny superb fairywrens were foraging. The males are stunning in their breeding plumage whilst the femI have read that they are socially monogamous but sexually promiscuous. Sounds like an open marriage.

After our late lunch we continued our coastal drive, keeping an eye out for whales, but none appeared. We went by the local golf course where the green fees are just $2. This might be because the lawns are cut for free by the residents for whom the island is named. We saw one with her joey peeking out of her pouch. Tim told us this was the first he had seen this year, so were lucky to see it.

As we headed back to the airport, we saw an echidna train. An echidna is an amazing creature which looks like a porcupine, but which lays an egg which it keeps in a pouch and then feeds milk to the resulting baby, which is rather wonderfully called a puggle.  Occasionally two or more males will follow a female they wish to mate with – we saw three animals in such a train. Unfortunately, as we watched hoping they would emerge from the roadside bushes, several cars went by very fast, and only one came out into the open.  Sadly it was almost dark, and he crossed the road rather quickly, so the pictures I got of him were all rather fuzzy.

Kangaroo Island was wonderful, with such a proliferation of wildlife that sadly rather a lot of it ends up dead at the side of the road. Tim was a very knowledgeable guide, and he also pointed out many of the island’s idiosyncrasies as we passed them.  One is a smart bus stop, with a tarred area for the bus to stop on and a shiny blue shelter.  What is wrong with that, you might ask. Well, there are no buses on Kangaroo Island! There seemed to be rather a few such things on Kangaroo Island.  Perhaps they need a new council!

After boarding the tiny plane back to Adelaide, I just had time to catch up with my old friend George from university days. From Adelaide I will be driving to Melbourne via the Grampians and the Great Ocean Road.