I drove from Adelaide to Dunkeld at the southern end of the Grampians after picking up a hire car. This time a Toyota Corolla. I carefully made sure I located the lights, indicators and windscreen wipers before setting off, noting that I was going to struggle as the wipers and indicators were on the opposite side to that I am used to. I also noted that, whilst an automatic, it had a squiggly gearbox. I manoeuvred down the squiggle and set off, only to find the engine shrieking, and every time I had to turn left I switched the wipers on. Fortunately I soon came to a traffic light which gave me a chance to sort out the engine (turns out I was in M, not D; I had gone too far down the squiggle) and switch off the wipers, but it was not a relaxing start to my journey. As I joined the motorway out of Adelaide, it began to pour with rain and the car began to fog up, matching the fog on the outside. I switched the indicators on and off before locating the wipers, and had to open a window in the pouring rain while I figured out the air conditioning, but eventually I sorted that out, the car de-misted and I drove along okay in the rain and the fog, except that I turned off the windscreen wipers every time I tried to overtake a truck. Given how hard it was raining, this meant I was immediately unable to see. Fortunately I was able to see the funny side, and managed not to kill myself or anyone else. 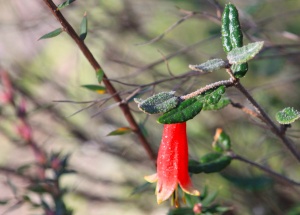 It rained for the first 300 km or so. I stopped briefly in Bordertown, where there is a reserve with white kangaroos. I was feeling tired, and tried to buy a sandwich for lunch, but was told orders for sandwiches closed at 1.30 – it was nearly 3.00. So I relied on a walk in the rain and a diet coke to wake me up. I decided to leave the white kangaroos and press on as I did not want to be driving in the dark. I passed the reserve on my way out of town, and saw the white kangaroos as I drove by, which made me a bit sorry I had not taken a few minutes for a picture or two. The sun then came out and it was a beautiful afternoon and a nice drive through the farmland of South Australia. I suddenly realised I was low on petrol, and fortunately stopped, as it was to be the last chance to get any. It also then quickly got dark, and suddenly I was driving along in the pitch dark, seeing lots of signs warning of kangaroos on the road, and no other signs of life. In two hours, I saw one marsupial, which I fortunately managed to evade, and about three cars. The three cars were all heading towards me on a one lane section of road, so I had to drift half on, half off the road to let them past. Eventually I reached the tiny town of Dunkeld, where I was staying. I had great difficulty finding the hotel as the sign is hard to read at night, but eventually found it on my third pass through Dunkeld’s four blocks when I stopped to call and ask for directions, and realised I could see it!

As I was exhausted, having driven about 550 kilometres in challenging conditions, I was pleased that it was a really nice hotel, the Royal Mail. I eschewed its fine dining restaurant though, as I could not imagine chewing my way through a degustation menu on my own! I had a nice meal and a very well earned glass of wine at the bar instead.

Kangaroo on the Mt Sturgeon trail

The easy part of the trail

After all the rain, it was a beautiful day the next day, so I decided to do the 7 km hike up Mt Sturgeon to admire the view. It starts with a gentle meander through the forest, where occasionally I would get the sense that I was being watched and look around to find a kangaroo gazing at me. Mostly they have little fear, and simply watched as I hiked past, although I did set a couple bouncing away when I sneezed loudly. Despite being the middle of winter, there were lots of red and pink flowers around. After a couple of kilometres, the path began to climb and went from a sandy path to a steep rocky one. I clambered upwards, occasionally turning to see the view behind me. I often thought I was nearing the top, only to discover more hill beyond what I thought was the top! The views were spectacular, although unfortunately for photographs, directly into the sun. Eventually the path started to descend again, and up ahead I could see a rocky escarpment that I knew must finally be the summit. Descending through another little forest, the path then climbed steeply upwards to the summit, giving me amazing 360 degree views of Dunkeld to the south, the Grampians to the north and farmland on either side. It was very windy at the top, so I was careful not to get too close to the edge. After a quick snack and some water, I started back down again. 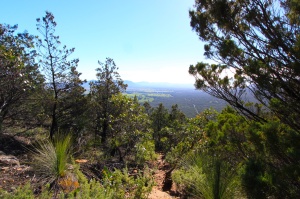 The view from the trail

The summit in sight 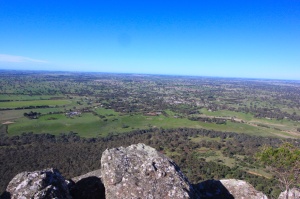 The view from the top – Dunkeld

The view from the top to the west

On the way down I appreciated how steep the climb was. In a way it was harder on the descent, as I was constantly having to look down to check where I was putting my feet. I passed a young couple heading up, the only other people I was to see on the hike. It was nice to hit the level part towards the bottom and be able to spend more time looking around at my surroundings rather than focused on the path. When I got back to my car, I had climbed 450 metres, walked 7 kilometres and had a thoroughly nice time.

By the time I had checked back with the hotel to let them know I was safely down and eaten lunch, I knew I did not have enough daylight left to drive to the Aboriginal shelter which was at least an hour’s drive, hike to the shelter to view the rock art and be back before dark, so I decided to leave that for the following day and just go for a drive. Driving at night is not recommended because of the wildlife on the roads. 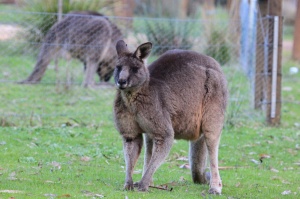 The head of the lawn mowing team 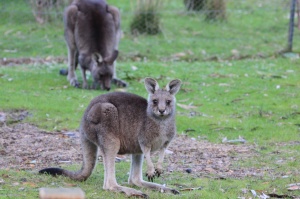 As I was driving along through the Grampians National Park, I saw an animal moving by the side of the road. I slowed and could see it was an echidna. Unfortunately, by the time I had stopped and turned around, he had scurried across the road and disappeared into the bushes. Still no decent echidna picture! I then turned into a camp ground which was completely empty, other than a team of kangaroos diligently mowing the lawn. They were amazingly relaxed in my presence, most not even lifting their heads when I got out of the car. They are amazingly adept at ducking under fences to get at the grass they enjoy. I watched them for a while, nearly jumping out of my skin when a cockatoo began to screech in a tree nearby, interrupting the peace of the evening. As I headed back, I nearly ran over an emu which suicidally dashed across the road in front of me. While my heart was still racing, and fortunately before I had sped up again, a kangaroo ran across in the other direction. I was relieved to make it back to the hotel without eliminating any wildlife.

After checking out the next day, I set off towards the Manja Shelter, where the Cave of Hands can be found. It was raining on and off, but I was optimistic that I might get a break in the weather. However, once I turned onto the dirt road towards the trailhead, it began to pour. My little car began to slide on the slick muddy surface, and as there were no other cars around, I decided that I had better turn around, as there was no one to rescue me if I slid into a ditch. There was water running across the road in places, so even though I was crawling along, this was a real possibility. I did not suppose any of the many kangaroos I passed would be much help. I turned around and headed south towards the town of Port Fairy, from where I would join the Great Ocean Road, feeling that I could have used another day or two in the Grampians.

2 thoughts on “The Glorious Grampians”